What is Moyamoya Disease?

Elwood's Moyamoya (MMD) stems from his caratoid arteries being occluded.  Caratoid arteries are ones in the sides of our necks that run to our brains nourishing them with oxygen and blood, etc.  With Moyamoya, caratoids stop halfway up his neck.  Blood flow is stopped and doesn't reach the brain, causing the temporary ischemic attacks or TIAs.

In approximately 2003, Elwood passed out and woke in a hospital room.  His sister had already been diagnosed with MMD so he told the doctors, "Moyamoya."  At this point, they ran out of his room to look it up in the nearest medical dictionary.  Nobody around here had heard of it - or if they did it wasn't a name bandied about quite often.

Elwood's surgery was performed months later in an amphitheater teaching room of Cleveland Clinic so that others could observe.  His was one of the first, if not the first, performed in the Cleveland area at that time.   His surgery is not one that is normally performed and certainly not at all like the one his sister had recently. Hers was done at Stanford Moyamoya Center in California at the state-of-the-art Moyamoya wing.  His surgery was simply to improve the quality of his life until he was supposed to die approximately 6 years later.  That was his prognosis! 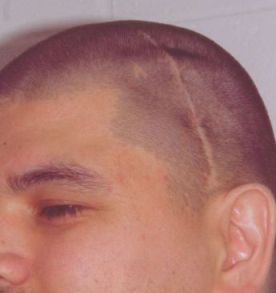 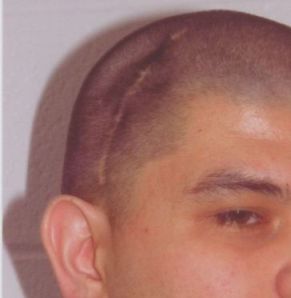 Please see my forum entry under topic Subdural Hematoma for hereditary information discussed in a study published in April 2009.

In a July 2010 Article published in Movement Disorders about Movement Disorders Associated with MMD:  "The onset of movement disorders was thought to be sudden. In 13 patients, the movement disorders were precipitated by hyperventilation or emotional stress."  They described patients as having chorea, dyskinesia, and dystonia.  Chorea is jerky movements, typically arms, legs and face.  Dystonia consists of muscle contractions, usually in repetitive manner.  Dyskinesia would involve pain with movement.  Elwood had the chorea and dyskinesia well documented in his medical records.

Wikipedia shouldn't be copyrighted and they appear to have decent information:
http://en.wikipedia.org/wiki/Moyamoya_disease

There is also a support group here, the guestbook of which Elwood (and I eventually) signed: guestbook at Moyamoya.com

Latest email from Moyamoya.com site - see bottom of this page!

On the site there is some great information about moyamoya by:

"The pathogenesis of moyamoya disease is unknown, but several associations have been made. A history of inflammation in the head and neck region has been implicated in the development of moyamoya (sic) disease, with one series showing that approximately two thirds of patients had previous inflammatory disease. This inflammation model has been reproduced in dogs - foreign protein injected into the carotid artery led to the formation of intracranial vessels with a moyamoya (sic) pattern. Other potential causes include tuberculosis meningitis, arteriosclerosis, neurofibromatosis, irradiation, sickle cell anemia, connective tissue abnormalities, and congenital causes. A hereditary factor has been proposed, because the incidence of familial cases in Asian populations has been reported as high as 7% and because the incidence of moyamoya (sic) disease in patients with Down syndrome is high.

"Autopsy reports in moyamoya patients show prominent intimal thickening, which in some cases is due to lipid deposition and edema. Abnormalities in the internal elastic lamina, including thinning or duplication of this layer, also have been seen. Moyamoya vessels also showed focal fibrin deposition and marked thinning of the vascular wall, primarily within the media and adventitia."

Epidemiological & Clinical Features of Moyamoya Disease in the USA

"The number of patients identified and admitted with Moyamoya disease has risen dramatically in the last decade."

Background: An increasing number of cases of Moyamoya disease have been reported in the Japanese and US literature. We performed this study to quantify the rise in the prevalence of Moyamoya disease and to study the unique epidemiological and clinical features in the USA that may explain a change in incidence.

Results: From 2005 to 2008 in the USA, there were an estimated 7,473 patients admitted with a primary or secondary diagnosis of Moyamoya disease. Patients admitted with Moyamoya disease were most frequently women and Caucasian. Overall, ischemic stroke was the most common reason for admission. Hemorrhagic stroke was more frequent in adults compared with children, 18.1 versus 1.5% (p < 0.05).

Conclusion: The number of patients identified and admitted with Moyamoya disease has risen dramatically in the last decade. This study can lead to a better understanding of the disease pattern and healthcare consequences in the USA and suggests that pathophysiologic differences in Moyamoya disease may exist.

Link to Abstract on PubMed

"Each year in the United States 200,000-500,000 people have a transient ischemic attack (TIA).  These episodes of brief neurologic deficits were thought to be fairly benign, but this view is changing.  In 2002, a new definition for TIA was proposed, and a more intensive diagnostic workup recommended to look for a probable cause of the transient neurologic deficit.  Implementation of prevention strategies is essential because the risk of a stroke following a TIA is approximately 30% within 5 years. [emphasis added]  These changes have important implications for nursing care and patient advocacy.  In addition, patient and family education must be addressed by the entire healthcare team."

"Tia is still defined as a 'neurological deficit lasting less than 24 hours that is attributed to focal cerebral or retinal ischemia.'"

Children's Hospital Boston, Dr. Scott and David Steger, are inviting everyone to a ground-breaking opportunity to watch a pial synangiosis surgery on a Moyamoya patient live on the Internet.

I got the email today and wanted to spread the word.

This procedure is being pioneered by the Children's Hospital Boston, Neurosurgeon-in-Chief, Dr. Michael Scott, which involves relocating a healthy blood vessel, the superficial temporal artery, from the scalp to the surface of the brain.  (Remember, Moyamoya patients are experiencing lack of proper blood flow through their carotoid arteries, where oxygen and other nutrients the brain needs to function successfully would come).

i just got word about the 2012 Gathering.  I wanted to promote this immediately in hopes more people will be able to attend.

'We are very excited to announce that the 2012 Moyamoya.com Gathering will be held June 21-24, 2012 at the Great Wolf Lodge located in Kansas City, KS.

"Hope to see you there!"

"Please afford me a moment of your time in order to tell you about the 2012 Moyamoya.com Gathering.  This year we will be getting together June 21st – 24th at the Great Wolf Lodge in Kansas City, KS.  Please consider joining us and other moyamoya patients and their families as we get together at one of the midwest’s premier indoor playgrounds for a weekend of information, sharing and FUN!

"Please don’t miss this exciting opportunity to meet and share with others who have been diagnosed with moyamoya disease.  Please visit the moyamoya.com message board for registration information and more details by visiting this address:  http://www.moyamoya.com/cgi-bin/yabb2/YaBB.pl?num=1312755383

"If there are any questions I can answer for you please don’t hesitate to contact me at deej@moyamoya.com.  Hope to see you soon!"

"Moyamoya.com is proud, and extremely excited to announce that two of the world's leading experts in the research and treatment of Moyamoya Disease will be speaking at the 2011 Moyamoya.com Gathering at the Crowne Plaza in downtown Philadelphia, PA on June 17, 2011.

"Dr. R. Michael Scott and his colleague Dr. Edward Smith, both of Children's Hospital Boston, will attend the welcome session of the MM.com Gathering on Friday evening from 5:30 p.m. to 7:30 p.m.  They will discuss the long-term outcome of surgical treatment of MMD and the current genetic research being conducted by Dr. Smith.

"Please consider joining us from June 16-20, 2011 for this exciting event to learn and fellowship with other Moyamoya patients and their families.  More information can be found on the MM.com message board found here:  Moyamoya.com message board."

Dr. Gary Steinberg from Stanford University will be attending.  Stanford is where my husband's sister had her surgery performed in the state-of-the-art Moyamoya Center.  This is a great opportunity for those who can make it with such an expert like this attending.  He has performed approximately 800 revascularization surgeries, which makes him one of the most experienced in the world. As this list is updated I will continue to get the information out, or you can use the link above to contact Moyamoya.com and get their updates personally.  It's a great resource for Moyamoya.

Background and Purpose—The purpose of this study was to investigate whether thyroid function and thyroid autoantibodies were associated with the risk of moyamoya disease in pediatric subjects.

Results—We included 114 pediatric patients and 114 healthy control subjects. The patients displayed higher prevalence of increased thyroid function and elevated thyroid autoantibodies in comparison with control subjects. These remained significant after multivariate adjustment; the ORs (95% CI) for increased thyroid function and evaluated thyroid autoantibodies were evaluated as 12.47 (1.55 to 100.51) and 4.33 (1.29 to 14.59), respectively.

This is a great article to explain the symptoms of Moyamoya, how it presents initially and how it gets diagnosed.  It also describes the history of the disease and it states that the "...incidence of familial occurence is high..." and that there is a suggestion that there is a "strong association with anticipation in familial moyamoya disease."

The article in its entirety for review:  https://www.theamandatruthproject.com/Medical%20Journals/Takanashi_Jun-ichi_2011_Moyamoya.Disease.Children.pdf

Please check back as I am continually updating this page!

Lorina Troy - Miracles of Faith
by Tonya over a year ago