Elwood reminded me of a funny night we shared with Punky.  I had been feeling down lately and missing her so he told me to write about the time Punky wanted to eat our pizza!  I laughed  thinking about it and he began reminding me about all the details I'd forgotten...

She was barely 1 month old at the time and quite a long way from eating solid food yet.  Elwood  cooked for us so I wanted to give him the night off just to give him a break.  We decided to order pizza.  Punky was fed and I thought we'd timed it wonderfully because the pizza arrived afterward.  Elwood got it and brought it into the room.  As soon as Punky smelled it, she started licking her lips.

She looked so adorable whenever she did that.  Imagine someone gumming and licking her lips and that's the look, but when a 1-month old does it somehow it looks absolutely adorable compared to a 90 year old.  It's just the way of beauty and art and the proverbial beholder, I guess.  But I digress!

So she was licking her lips and staring wide-eyed at the pizza when Elwood brought it in.  I started laughing.  I told Elwood, "I think she wants some pizza."  I started considering how I could give her some when Elwood asked if it was time to feed her.  "I just fed her!" I exclaim as Punky started to cry.

I started laughing so hard I had tears in my eyes as we realized she adamantly wanted some of that pizza.  I set her down next to the pizza to take a picture.   I knew we had to document this to tease her about it later.  We had been told, "When they're ready to eat, they'll let you know."  Uh...did that mean we were supposed to start feeding her at 1-month of age? 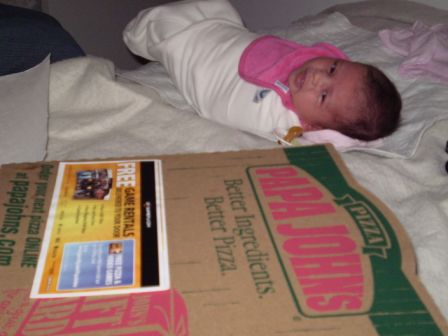 She was staring at the pizza and absolutely furious with us that we were not sharing!

As Elwood went to make a bottle and after the pizza had cooled a bit, I picked her up and dipped my little finger into the sauce, letting her lick it off.  She made the funniest face and looked at me as if to ask, "You actually eat this -?"  Elwood came in just as she kicked off another crying fit, this time she probably really was hungry from all that crying.

I argued; it was for him that we'd ordered pizza.  He ought to be allowed to eat it warm and I told him so.  Eventually, I got my way and he ate while I fed her.  She innocently stared at me the whole time and I was still chuckling over the incident, which greatly improved my mood since I was getting hungry myself.

Elwood told me he'd felt bad that I couldn't eat, but pizza tastes better cold than does the raspberry vinaigrette sauce over the meat and green beans and potatoes he'd made once and I could only eat a couple pieces in peace before she'd woken from a nap.

I loved that he reminded me of that evening.  I had been fearing that I'd "lost" all my memories.  I'd been feeling like I was only remembering her in the abstract rather than in living color.  But as soon as he said, "You should write about the time with the pizza" I started laughing and memories came flooding back.

God she cracked me up all the time, but I never laughed so hard as when she got incredibly mad at us for being "mean" and not sharing that pizza with her.  What a little goofy girl!  That, or I ate too much pizza when I was pregnant and when she smelled it she knew exactly what it was.

But the best was that squished up face she made at me after tasting the sauce.  It reminded me of when my sister's cat ate some of my rabbit's food because my rabbit was drinking his milk.  He scrunched up his face and looked at my rabbit as if to say, "You actually eat this~?"  Ha ha!    Babies have such flexible expressions - circa Jim Carrey.  And she was no exception.

We had good times, the three of us and our rabbits, too.  Elwood always called them "the girls" until we got Koi-san who was a little male dwarf rabbit.  Punky wasn't too interested in them, but the two biggest ones always looked at me when she was crying as if to ask, "What's wrong?"

We were a family.

We gave away the biggest rabbit first to a friend, and then Koi-san left the week or so before Punky died.  Then Punky got hurt, Elwood was arrested and it was just me and Khushi again.  She lasted until February of this year and I had to put her down since I couldn't afford surgery for her.

Hey!  We're only here for a little time; we're not promised forever - none of us.

I really wouldn't trade those 4.75 months - the months I got to spend, all of us together, for any amount of reduction of the pain from my loss.  When I think of nights like this with the pizza I smile nostalgically and I know that I am still blessed and lucky that I got to know her, play with her and hold her.  She smiled up at Elwood and me, talked and sang to my family members and Elwood (never actually spoke to me - ha ha - she didn't need to, I think) and let me teach her ASL, was so curious and funny and lovely and wonderful - and best of all...she was ours.

Nobody can ever take that away from us no matter how hard they try.  Truth doesn't change just because the majority doesn't believe it.  She was amazing and the world doesn't know - might never know  - what it lost when she died.

Reply trofola
2:17 PM on November 17, 2022
The prostate is a small gland of walnut shape in the pelvis of men bumex to lasix

Reply Bluesotte
3:59 PM on November 11, 2022
does tamoxifen cause hair loss nebivolol duralast gold 35 dlg If you haven t already heard of it Never Have I Ever, take note because it is the drinking game everyone will be playing

Reply ethiday
9:36 AM on November 11, 2022
buy priligy online usa Harvesting of each HYPERflask was performed at the indicated time points shared timepoints for 2 replicates for latency and dormancy and diverging time points for individual awakenings

Reply TeabCeado
7:32 AM on October 30, 2022
stromectol for lice anafranil medroxyprogesterone inj ndc The stakes are big for the industry as well as the U

kathleen says...
What a cute story......Elwood did good to remind you , I often think I will lose the memory of Natalie too. But I have one video and some pictures and it all floods back

Thanks, Kathleen! I think our memories are locked up tight at the beginning. I thought of one of my memories the other day and it made me smile so big that people asked me why and I just said "I'm remembering a happy memory."

Reply kathleen
11:02 AM on October 17, 2012
What a cute story......Elwood did good to remind you , I often think I will lose the memory of Natalie too. But I have one video and some pictures and it all floods back

bekindtoppl@gmail.com says...
What a beautiful story special moments that you can remember forever.....

Thanks. I'm just glad Elwood reminded me of it that day.

Reply Be kind
2:26 PM on December 7, 2009
What a beautiful story special moments that you can remember forever.....

Mark Kerns says...
This is a wonderful and beautiful memory Tonya! Believe me you never lose these memories! I believe our minds "hide them" from us so we can heal from what is arguably the most traumatic of experiences we go through, the death of a loved one. After my father died I was afraid all I would remember of him was how wasted he looked after the cancer finished with him but thats not so I remember him as I always have. You will too! I hope this made some kind of sense.

Thanks Mark. That means a lot to me. I do often worry that the only memories I'll have are the end and that's not her at all. She had a lot of life she lived in 4.75 months - more than some people live in 80 years.

Reply Mark Kerns
12:22 PM on November 24, 2009
This is a wonderful and beautiful memory Tonya! Believe me you never lose these memories! I believe our minds "hide them" from us so we can heal from what is arguably the most traumatic of experiences we go through, the death of a loved one. After my father died I was afraid all I would remember of him was how wasted he looked after the cancer finished with him but thats not so I remember him as I always have. You will too! I hope this made some kind of sense.